FastCommand is used by hundreds of hospitals, universities, governments, & other institutions. It was a critical tool during emergency situations such as the Gulf of Mexico oil spill, Tucson's Gabrielle Giffords shooting incident, & North Dakota flooding. 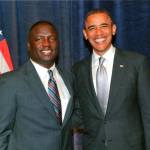 came when we were hit by a F3 tornado which totally destroyed our hospital. Through FastCommand, the entire county was able to communicate with the outside world. I don't know how we would have survived without the FastCommand service!" - Marcus Johnson, Phoebe Sumter Medical

It takes 30 minutes to
show this to you!